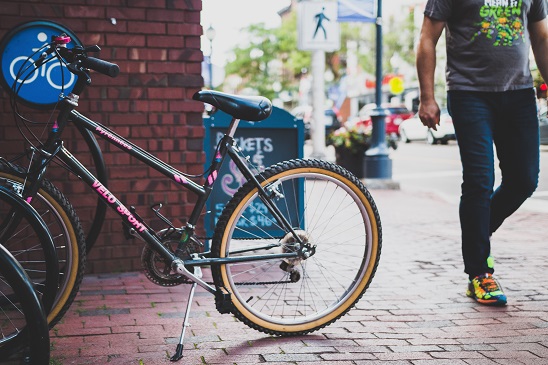 What to Do After a Bike Accident

Being involved in a collision while riding your bicycle is an unfamiliar experience for most people. Unlike most car collisions, when you are in a collision on your bike, you are more likely to suffer broken bones or see blood from cuts or scrapes. It’s no simple task to keep a clear head or think rationally in this situation. Depending on the extent of your injuries, there might be little that you can do after being hit, other than put yourself into the hands of the EMT. But there are steps you can take that will make sure you get the help and information you need before leaving the scene of the accident.

A lot of people have the tendency to downplay their injuries at the scene. In part this is due to the fact that being struck is adrenaline-inducing and shocking. It’s not immediately apparent what hurts and what is wrong. If you were struck by a car while riding your bicycle, call 911. Just do it. Or tell someone else to do it. Don’t try to assess whether you are “ok” enough to avoid calling the police. If anything hurts, or part of your body is numb, or you see blood, request an ambulance, too. First responders are key to getting the help you need now and to record basic information that you will need later.

Police officers do not automatically write an incident report after a collision. If you’ve never been in a collision before, it may not occur to you that even if the police are called to the scene, the officer may not write a police report. The law in Virginia is that an officer must write a report when there is death, injury, or more than $1,500 in property damage. Otherwise, the officer does not have to write a report (this means that the officer will not write a report). So if you say that you are “ok” even though something hurts or you are scraped up, the officer will likely take that as “no injury” and will not write a report. Likewise, many officers are not familiar with the value of a bicycle and may not realize that the damage to your bike exceeds $1,500. So if you are hurt, even a little, or if your bike is damaged, politely but firmly request the responding officer to make an accident report. A police report often plays an important role in any claim you may make in the future, and is also important for the local government to keep track of bicycle-related collisions.

After a collision, you need the name, address, phone number, and insurance information (name of insurance company and policy number) from any vehicle driver involved. Don’t even worry about determining whose fault the collision was. Don’t try to assess your injuries or damage to your bike. Just swap info. Everything can be sorted out at a later time if you have a way to contact the person and/or start an insurance claim. If police respond to the scene because you or someone else called 9-1-1, the police should take down this information. If you are badly hurt, you can get the driver’s contact information at a later time from the police report.

Uninvolved witnesses will help sort out what happened in a collision. If other bicyclists were nearby and saw what happened, ask for their name and phone number. If someone stops to help you, get that person’s contact information. Witnesses or good samaritans often volunteer this information. Responding officers should seek out any witnesses to include in the police report. But you can protect yourself by asking any witnesses to jot down their name and a way they can be reached. You don’t need to discuss anything at the scene, just find a way to get in touch with the person at a later time.

These are some simple steps to take to protect yourself after you’ve been involved in a collision. Keep in mind that there is no need to discuss what happened (except with the officer so that he can include it in his report). The scene of the accident is no place to get into an argument or confront anyone. Keep a clear head and follow the above steps to preserve and record the information that you may need later.